You are here: World Building

For the latest version of WorldGen, information has moved to https://www.notasnark.net/worldgen/.

Recently a new application - WorldGen has been added to the project which provides the facility to generate world maps for a Science Fiction universe. It can randomly generate thousands of star systems, then create a unique map for every world and moon according to their type. It is based loosely on the Traveller universe and method of mapping star systems. Currently, this is where most of the development is focused, in particular in modelling the economics of the universe that is mapped.

WorldGen has recently been re-written almost entirely from scratch. The original version was based on code that was over 15 years old, and didn't use any modern Java frameworks. In the last year or so it has been re-factored heavily, and now uses Spring and JPA on the backend, and JQuery on the front end with an extensive set of REST APIs specifically aimed at producing a rich web application.

The map generation code has been greatly simplified as well, in order to speed it up and minimise distortion between the 'flat' maps and the actual spherical world. Though they are currently much lower resolution, there is a long term plan to improve that. 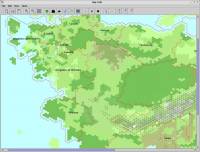 Initially, Mapcraft was just a Java Swing based GUI editor which allows tile based (hexagonal or square) maps to be created. As with Yagsbook, these maps are stored in a way that preserves information about their 'mappiness'. This editor is designed for the creation of maps in a fantasy or historical game, where at most a single world is being developed.

This project was started around 2000, and reached a point where it was a usable application. It was decided to add the facility to randomly generate whole worlds, and that feature sidetracked the whole project into what has become Worldgen. There have been a few attempts to re-visit Mapcraft, but it is effectively on hold. Any further development will almost certainly take it in the direction of a web application rather than a client side Java program.